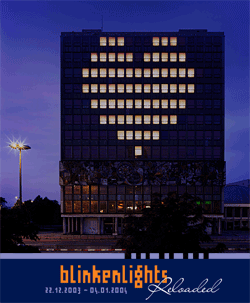 Starting December 22th, 2003 until January 4th, 2004 there will be a short revival of our interactive light installation known as Blinkenlights: Blinkenlights Reloaded.

The building Haus des Lehrers – currently under reconstruction – will be operated as we did it before. A new version of BlinkenPaint lets you create movies and you can play the interactive game Pong and even activate your personal loveletters with your mobile phone.

Blinkenlights Reloaded uses the technology we have developed for Arcade in Paris last year. That means greyscales. Version 3 of BlinkenPaint supports this as well as our new movie file format BML which is based on XML.

For those unfamiliar with Blinkenlights, the Blinkenlights documentation videos should be the first stop. The videos are available in various formats and sizes and I think they are pretty impressive as well. Check them out.

The whole Blinkenlights toolset can be found on Sven‘s Blinkentools page. The software should compile easily on UNIX systems, including Mac OS X (although you need glib2 installed: use fink). The blinkensim can receive Blinkenlights Protocol streams and display them in a simulator window. We try to provide you with the live data stream of Blinkenlights Reloaded so that you can display the same data at home!

In the coming days, this blog will serve as a daily update on Blinkenlights Reloaded, BlinkenArea developments and the 20C3 as well.